The Joint Admissions and Matriculation Board (JAMB) has announced its plan to build a new headquarters at the Central Business District, CBD, of the Federal Capital Territory, FCT, Abuja.

The disclosure was made by the Director, Finance, and Administration, Mufutau Bello who represented the Board at the ongoing investigative hearing with the House of Representatives Committee on Public Accounts on revenue generation by the Ministries, Departments, and Agencies MDAs of government on Thursday.

The hearing was occasioned by an audit query of the Auditor General of the Federation to the MDAs.

Bello said that the Board has been saving N2 billion annually since 2018 to help realize the project. At the moment, the Board has realized N5.5 billion.

“We are proposing to move our central headquarters to the central area (of Abuja). We have a plan of over N6 billion but since we don’t collect subvention from the government for our overhead and capital, so every year from 2018 we have been setting aside N2 billion because our target is N6 billion to be able to acquire our headquarters in the central area.

“The money is in our TSA, we had a challenge in 2020 because of COVID, so we could not realize our budget. So far we have realized about 5.5 billion,” Bello said.

Lauding the effort, the Chairman of the Committee, Oluwole Oke however advised the Board to invest the money.

“You cannot keep such money idling in an account. That is poor treasury management,” Oke said.

It will be recalled that JAMB is currently domiciled in the Bwari Area Council of the FCT.

JAMB Suspends Compulsory Use of NIN For 2020 UTME/DE Registration 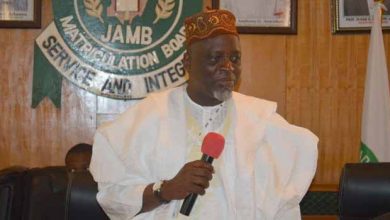